The Life and Times of Ruby Skye P.I.

The little web series we’re shooting now isn’t actually called Ruby Skye P.I.  It’s called The Spam Scam.  It is but a pin prick in the universe of Ruby Skye P.I. that I imagine. Not only... Read More →

Diary of A Director: The Read-through

Meet Kelly Harms, the amazing director of Ruby Skye P.I. Here’s an instalment of Kelly’s production diary: Monday, August 9 – Quite simply, a finished film will only be as good as the script allows it... Read More →

We’re shooting Ruby Skye P.I. on a Canon 5D  that records directly to cards.  There is no videotape or film.  We immediately backup the cards onto hard drives and the cards are then sent back to... Read More →

After a full week of shooting, it’s time to take a look backwards and ask “what could we have done better?” and “what have we learned?&#... Read More → 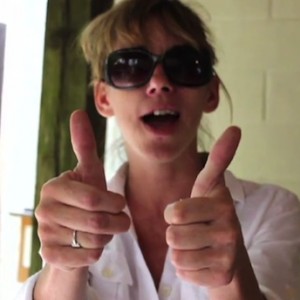 From the camera of Ms Can-Do Jennifer Liao of Believerville Productions this terrific little film about our fearless leader, Karen Walton... Read More →

This is a wonderful behind the scenes look at what a tech survey is all about. This mini-doc was made by filmmaker Jennifer Liao, of Believerville Films — one of the filmmakers who are documenting the... Read More →

The first of our behind the scenes videos, this one from the camera of the wonderful Jennifer Liao of Believerville Productions... Read More →

I did record a video blog this morning, but YouTube is still processing it.  Believe me, the way I look this morning I can definitely use some serious compression.  I can only imagine how I’m going... Read More →

Julie and I finished the pink draft of the script about an hour ago.  A moment of relief for us, but time for everyone else to spring into action at just the moment that they could... Read More →

I’m trying to figure out which video host I want to use for this project.  In the past, I’ve tried hosting video on a number of sites including Tubemogul, Vimeo, YouTube.  YouTube used to have terrible... Read More →