Published on September 8th, 2010 | by rubyskyepi 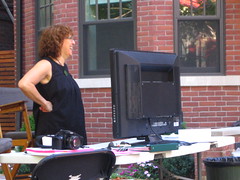 You’d think things would slow down a little now that production is done, but you’d be wrong.  I’m busier than ever.  Come to think of it, production was just an excuse for me to watch everyone else work, but let’s face it, I was goofing off.  Now, I need to put my shoulder into it.

I just finished an exhaustive list of the content that needs to be produced for the web site.  In point form it runs 6 pages.  A lot of writing lies ahead.  And not just writing, there are photos to sort and videos to cut.  Which is part of my busy-ness: meeting with people who are helping me create the content and edit the footage.

But — oh — that’s just one small part of what’s got me feeling overwhelmed today.  There are quite a few other things on my plate.  I have to organize the distribution and exploitation of The Spam Scam — the Ruby Skye P.I. mystery we just finished shooting — and start pumping out the next mysteries in the series.

The former means a meeting with Tanya Kelen of Kelen Content later today to discuss distribution plans.  Tanya is acting as a consultant to the IPF on their web series and also has a distribution company.  I know little about this so it will be good to see what a distribution plan looks like.

Oh yeah, and I have to blog.  So check one thing off the to do list and moving on….