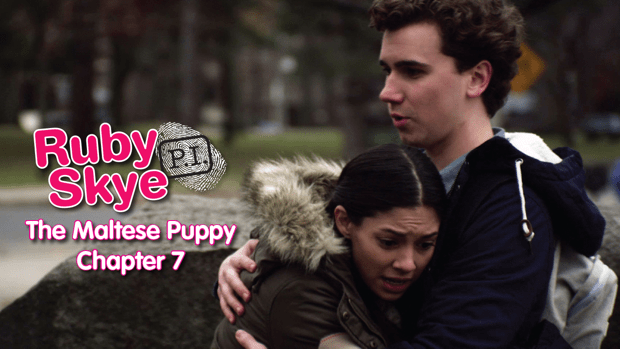 The Maltese Puppy – Episode 7 is called…

Ruby is devastated to think of Zoffi in jail. She tells Edmund about it. By his reaction she realizes that Edmund knows what Zoffi was doing the night of the robbery. Edmund won’t tell her what it is and calls her “a pain in the butt”. Ruby can’t imagine what secret is worth going to jail for.
Then Ruby gets an email from Pixel’s owner Trudy Snood who wants her dog back. When Ruby goes home to tell Hailey, Hailey is gone. So are all her clothes…. and Pixel!

Like the first two seasons of Ruby Skye P.I., The Maltese Puppy stars Madison Cheeatow. The Maltese Puppy – Episode 7 (and all the other episodes of the season) was written by Julie Strassman and Jill Golick and directed by Kelly Harms.