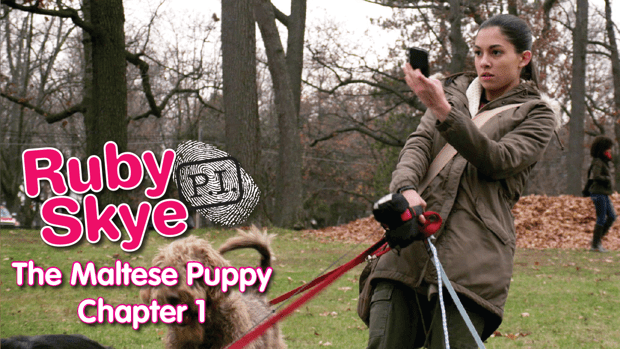 Here it is.  The long-awaited next season of Ruby Skye P.I.  This is The Maltese Puppy – Episode 1!

While out dog walking Ruby stumbles onto a fresh crime scene. Intrigued, she grills the detective on the scene for more intel.  He develops an immediate dislike for her.

When she gets back home Ruby walks in on Hailey and Edmund who are clearly up to something, the question being… what?

The mysteries continue to stack up when Ruby realizes she’s come home with an extra dog.  An over-the-moon Hailey thinks the puppy’s a gift and isn’t remotely concerned when Ruby tells her they must find the dog’s real owner.

A break-in, a secret between friends and a dog without a home – no need to worry Ruby Skye is on the case.

Like the first two seasons of Ruby Skye P.I., The Maltese Puppy stars Madison Cheeatow.  The Maltese Puppy Episode 1 (and all the other episodes of the season) was written by Julie Strassman and Jill Golick and directed by Kelly Harms.