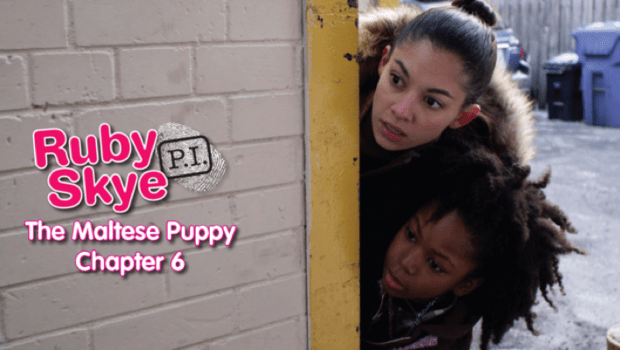 The Maltese Puppy – Episode 6 is called Kat and Mouse Games.
Certain that Reeny Mussolini is about to do something very bad, Ruby turns to Detective Von Schlagen for help. But when he doesn’t believe her, Ruby has no choice but to take matters into her own hands.

Ruby gets help from an unexpected quarter. Then she gets shocked again when she finds out who is helping Reeny Mussolini. And as if that weren’t enough shock for one episode, she is totally gob-smacked and astounded to find out what Reeny Mussolini is really up to.

And then she has to rethink everything.

Like the first two seasons of Ruby Skye P.I., The Maltese Puppy stars Madison Cheeatow. The Maltese Puppy – Episode 6 (and all the other episodes of the season) was written by Julie Strassman and Jill Golick and directed by Kelly Harms.