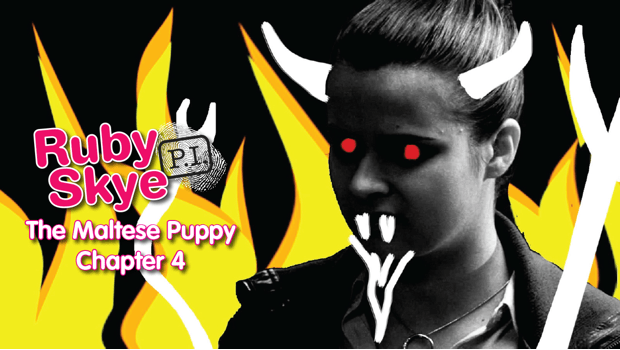 The Maltese Puppy – Episode 4 is called Everyone’s A Suspect.

Thanks to quick thinking on Edmund’s part, Ruby narrowly escapes from Colin Cumberbund’s office without being seen. She and Edmund hide in a broom closet and listen in as Detective Von Schlagen questions Colin Cumberbund and Reeny Mussolini about their whereabouts the night of the robbery.

Ruby zeroes in on her first suspect: Reeny Mussolini. Mussolini’s alibi doesn’t hold water. Her office door is locked which suggests to Ruby that she’s hiding something. And the final straw? Reeny Mussolini seems to be friends with Ruby’s arch nemesis, Diana Noughton.

Like the first two seasons of Ruby Skye P.I., The Maltese Puppy stars Madison Cheeatow.  The Maltese Puppy – Episode 4 (and all the other episodes of the season) was written by Julie Strassman and Jill Golick and directed by Kelly Harms.