Published on September 5th, 2010 | by rubyskyepi 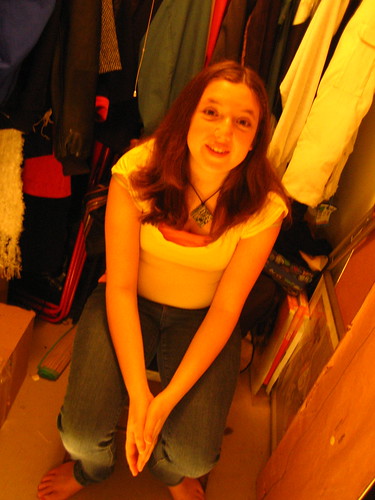 Marlee had been at ExITE Camp at IBM that day and wasn’t available until after 5:30.  Alex and Sean both had been working day time shoots I think.  Plus Kelly wanted to get all the mysterious mood that night would bring.

I had no idea what he was up to when Kelly asked me if I had a closet with a pull string light.  But I soon found out when Marlee was sitting on a chair in a storage closet for our first shot of the night.  I think that opening moment looks great when we go for darkness and Hailey pulls the string to turn on the light and begins to tell the story of how she got grounded.

We shot on the Canon 5D Mark II and in part, the teaser was a camera test.  It turned out to be a wonderful camera for our purposes and the images coming out of it are gorgeous.

We had a lot of setups: the basement storage closet, the hallway outside the bedroom, looking into the bedroom from the balcony, the kitchen, the computer room. Illia did the work of 10 men that night, lifting, carrying and running to and fro.

We wrapped around 12:30 a.m.  Despite having gotten up at dawn and having had a full day of camp before shooting, Marlee was the freshest and least exhausted of all of us.

We downloaded the cards from camera and the sound into my computer and called it a night.

Tags: behind-the-scenes, production, The Case of the Missing Brownies