Published on September 6th, 2010 | by rubyskyepi 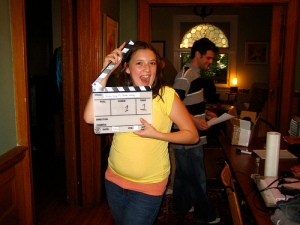 Editor Jennifer Essex-Chew was one of the earliest creatives to join the project.  I worked with Jennifer on the very first web project I did and loved her from the word go.  I was excited to get her involved in Ruby Skye P.I.

Luckily she had some time available and was able to cut the teaser.  Kelly and I brought the hard drive containing the video and audio files over to her lovely house.

Importing the files into Final Cut Pro wasn’t straight forward.  The first few attempts seemed to drop frames.  We called Alex Dacev as he was packing up to go to the cottage and he told us that we had to pull in the video taken on the Canon 5D Mark II through Mpeg Streamclip.  Phew.  For a moment there we worried.

Once we got the video and sound imported and sunk, Jennifer proclaimed the sound clean and that we had everything we needed.  She had a rough cut for us in a couple of days and she and Kelly did a little bit of tweaking to perfect it.

To give us an idea of how a music would work with the teaser, Jennifer added a temp track.  It was a piece of music from another production she’d work on and it was perfect for our teaser.  Jennifer told us that the composer – who she’d never met – was one of her favourites; David Wall.

Hello, internet.  We found David’s contact info and Kerry gave him a call.  Could we use his track?  Unfortunately, David didn’t own the rights to the piece, but he sent us another comedy-mystery cue that he did own and that he was willing to let us use instead.  It was even more perfect than the first.

Our on-set editor Ben Manthorpe and Alex collaborated on the final colour correct.  Then all that was left was to plan a release date.

Tags: behind-the-scenes, production, The Case of the Missing Brownies