That’s right. Henry O’Henry. The Brit so nice, they named him twice. Or so it seems, anyway.

There’s something fishy about this British man, even if it’s sort of hard to put your finger on just where that fishiness is coming from.

Maybe it has something to do with the way his comically thick British accent seems to keep going in and out. What kind of person would use a fake accent? What else might he be lying about?

Henry is library-owner Ava O’Deary‘s estranged nephew. He’s only met the eccentric master of alliteration a few times in his life, much like the rest of his family (including his cousin, Lillian O’Shyte). Henry’s mother, Ada O’Henry (born Ada O’Deary – anybody else getting confused yet?) had a bitter falling out with her sisters at a young age, and the O’Deary/O’Henry/O’Shyte/O’Fine family never speaks.

Phew. That’s one heck of a family tree. Could you imagine the family reunion?

Henry’s favourite thing in the world is, naturally, to sit down to some nice tea and crumpets with an agreeable guest. Earl Grey, two sugars, three creamers. Would you expect any less?

Favourite Harry Potter Character: All of them. They are British, after all. (But if pushed, he loooves Dobby.) 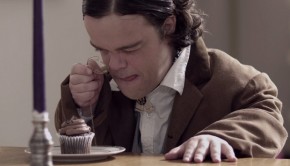