Mike did a tremendous job on the special effects for The Haunted Library. There are quite a few cool moments. One of my favourites is in Episode 2, when Ruby sprinkles phosphorescent powder on the library floor and it disappears and then turns blue. I also love all the things he did with text. In Episode 4, the letters in the first clue travel from Ruby to Hailey and then separate out to reveal the hidden message. Mike gave each clue it’s own personality. There’s Clue 4, the big chicken, that takes off when Ruby and Hailey hear noises in Episode 4. And Clue #6 which carefully deposits itself in Ruby’s bag.

We’ve paired Episode 4 with this post because it is a great showcase of Mike’s work. 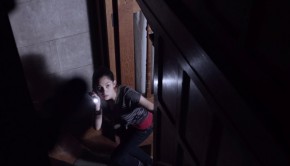