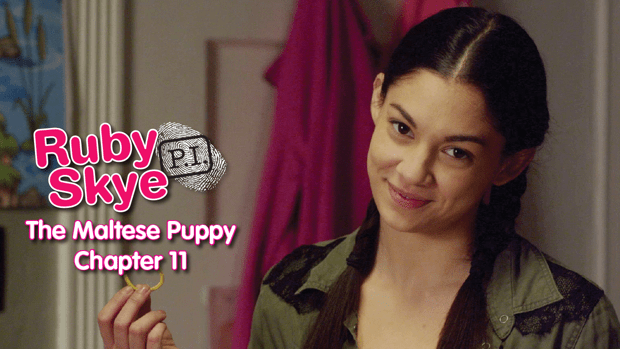 The Maltese Puppy – Episode 11 is called…

In The Maltese Puppy – Episode 10, Ruby found out that Colin Cumberbund and his accomplice, Trudy Snood, were the fiends who filched the Flobbles from FONK.  And Snood was only pretending that she was Pixel’s owner to find the girl who witnessed that robbery.  Only Snood snatched Hailey instead.

Ruby and Hailey escaped from the basement of Snood’s, but the villains were hot on their heels when they ran smack into a dance flash mob!  Luckily Detective Von Schlagen was there to make the arrest.

In The Maltese Puppy – Episode 11, the full truth about Pixel is revealed…. breaking poor Hailey’s heart!  Ruby and Diana talk truce but one of the girls still comes out of it covered in coffee.  Detective Von Schlagen gets a gift and reveals what he knows about the mystery.  Edmund and Ruby make up.  And then, just before the end of The Maltese Puppy – Episode 11, a new mystery is revealed.

Like the first two seasons of Ruby Skye P.I., The Maltese Puppy stars Madison Cheeatow. The Maltese Puppy – Episode 11 (and all the other episodes of the season) was written by Julie Strassman and Jill Golick and directed by Kelly Harms.

Disappointed that you’ve finished watching The Maltese Puppy? There are two other Ruby Skye P.I. mysteries to watch: The Spam Scam and The Haunted Library.