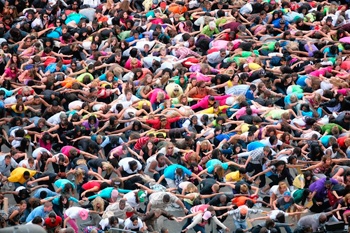 So you saw our flash mob this season on Ruby Skye and now you want to do one yourself? A flash mob is a group of people who get together suddenly in public to perform a quick artistic show for almost no reason other than to make smiles. It takes a lot of teamwork and planning, but with the help of your teachers and classmates, you might be able to pull of something like it! 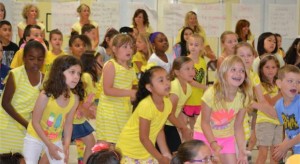 First let’s think of an aim: Why are we doing a flash mob? Is it to make someone happy? Is it to kick off the year? Let’s look at some others for ideas:

In Orland Park, Illinois, at Center School, the students and staff bid farewell to their principal with a flash mob choreographed to Pharrell’s “Happy”. The same song was used in Boston at Condon Elementary in honor of their principal’s retirement. At Condon, some of the younger kids were told the flash mob was for another staff member, just in case their loose lips let out the secret (which they did, SEVEN TIMES!) — so when everyone ended up singing for the principal, even those younger students were surprised!

It’s a reminder of the old lip-dub videos set to “Firework” or “Hey Soul Sister” and it can bring a whole school together. But it takes thoughtful planning to pull it off! At Petrova Elementary school in Saranac Lake, NY, an entire middle school surprised an entire elementary school with a “Happy” flash mob. It was the result of months of preparations. The French teacher showed her students videos of successful flash mobs. Dancers choreographed their moves every day at lunch. Each middle schooler made a present for each elementary schooler. And 400 students kept it all a secret!

Have an idea for a flash mob? Meet with a teacher at your school and talk about it! For everyone’s safety, it’s best to make sure the staff is on board before attempting one. Try to record it so you can share it with us here! Good luck and “Happy” Flash-Mobbing!