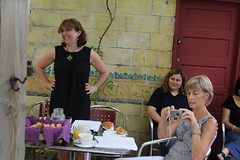 The first day of principal photography is coming fast. Three days left of prep. I don’t have a single second in the day to write… or think. I don’t even know what I’m doing with my time but it is disappearing quickly. This morning, I made three trips to the bank before 10 am.

Can I tell you that there is a big difference between banks? I never realized it until recently. One of the banks I deal with is always incredibly difficult even though I have banked with them for a long time and have reasonably valuable holdings with them (for instance, my mortgage). The other bank is always cheerful and has a total “can do” attitude, even though I have several empty accounts with them. Based on my recent epiphany, this may change. After the banking, I checked in on rehearsals. As a writer, story editor and creative producer, I’ve always seen a sharp border which I don’t like to cross. I’ve never talked to actors about scenes and characters — that’s not entirely true. As a story editor on a TV series, I have talked about some of those things with actors, not at rehearsals, but I’ve had actors come to my office to talk about their character and beg to have a scene changed. But mostly that is the director’s domain and I have tried not to trample on their territory. So, at a rehearsal I prefer to sit quietly and watch and listen. So imagine my surprise when director Kelly Harms not only wants me at rehearsals as much as possible, but wants me to discuss their characters with each actor.

I couldn’t spend a lot of time with the actors today, because I also had many things to talk to producer Kerry Young about…

I also had a long phone call to go over wire frames with Lucia Mancuso of The Blog Studio. What a web site we are going to have! Ambitious? I would say so. It is going to be just wonderful. I can’t wait.

I secured our final location. Yay. Went tech scouting with the crew. And spent a lot of time sending out emails inviting kids I know to be extras on the shoot.

We invented two extremely cool things today. The first was the Producers Meeting on Twitter. Kerry, Karen Walton and I barely have time to report to each other what we are each doing. So we decided to meet regularly on Twitter and share our meeting with the community at large. We have some kinks to work out of the process but people are interested in talking to us and we’re interested in sharing. Stay tuned for more @RubySkyePI Producers Tweet The Meets.

The second even cooler thing we came up with today involves our “backstage” shooting. We have involved quite a number of amazingly talented directors in the project, inviting them to shoot behind the scenes footage for our web site. Jennifer Liao has already spent a couple of days with us, shooting the cast read-thru, the tech scout, interviewing people and generally documenting pre-production. We should have some mini-docs from her soon to share with you.

Today, we started inviting some very young filmmakers to be part of this project. And when I say very young, I mean teenagers. We will have them on set, equip them with cameras and let them make films about the filming of Ruby Skye P.I.

So yeah, that’s what I did today.