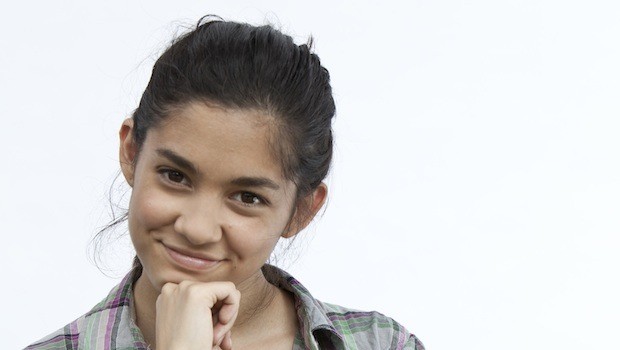 Here’s an interview with Madison Cheeatow who plays Ruby Skye.

Q. What made you interested in acting? How did you get started?

A. When I was 11 I started taking improv classes at my local community centre and I just had a lot of fun with it and it really just went from there. I then ventured into different kinds of theatre classes like musical theatre, and actually took part in few productions. The high school that I attend now has an arts program and I auditioned to major in drama. It wasn’t until grade 10 when I discovered film acting. I got started in film after I auditioned for an agency and they decided to take me on as a client.

Q. Your performance in Ruby Skye is so believable! Do you relate with your character? How are you like Ruby?

A. Thank you so much! I relate to Ruby in some ways. Ruby is very nosey and into everybody’s business. She is really quick to say whatever is on her mind without thinking it over too much. I mean, I’m not as extreme as she is, but I would say that I have nosey tendencies and there have been times that I have spoken without thinking. I think Ruby and I relate in the sense that we both like to lend a hand in finding a solution and being there for other people.

Q. Do you have any role models? Who inspires you?

A. Well there are a lot of roles models in my life, but the most imfluential I would have to say are my parents, and they have always inspired me to keep trying and to always do my best. They were always the ones bringing me to auditions and their dedication to me has always been an inspiration to work hard and make them proud. As for inspirations, I find that I usually get inspired by people that I am working with, take Ruby Skye for example. All the hard work from everyone on set, and I mean everyone, was such an inspiration for me. When I see people working hard, and really putting 100% into everything they do, it just makes me want to work that much harder in return.

A. The best. I love being on set, its just the greatest environment to work in, there are so many amazing people you get to meet, everybody is so friendly and nice. Its so cool to get to see all of these people working so many different jobs and tasks to create one piece. And it’s also a huge learning experience. I find being on set has taught me more than any acting class ever could.

Q. What was your favourite scene to shoot?

A. Definitely the closet scene where we shot Vinney with Coke. It was for sure one of the funniest moments when Kevin, the stunt director, accidentally dropped one of the mentos into the bottle too early and the coke sprayed everywhere inside the closet, drenching all of us. It was also awesome to be able to do such a messy stunt and the result was amazing.

Q. Any advice for young performers just starting out?

A. There is always something new, so never let not getting a role get you down. This is one of the most difficult businesses to be in, it took me a whole lot of auditions to finally land something and if you keep trying, and your really passionate about it, it will come. It might sound kind of cheesy, but if its really something you want to do, don’t ever give up on it.

Q. Do you plan to pursue acting in the future?

A. Yes. Acting is definitely something I would like to continue for as long as I can. Acting is something that I am passionate about and I am willing to be dedicated to it and to work hard to take it further. It would be amazing if I could make a career out of it as there are very few other occupations that I can see myself in as an adult.